What is the Cooper Running Test and Why do it? 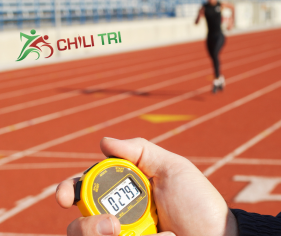 As a triathlete you probably test your training effectiveness regularly and complete the Critical Swim Speed (CSS) time trial test for swimming, Functional Threshold Power (FTP) testing for cycling and may a One-Repetition Maximum (1RM) test for strength and these will take at least an hour to complete fully. Many athletes get nervous before doing these tests and let’s be honest probably don’t look forward to them!

The good news is that there is a simple and relatively quick performance test for running and it’s called the Cooper 12-minute run test.

The Cooper 12-minute run is a popular maximal running test of aerobic fitness, in which you try and cover as much distance as they you in 12 minutes.

What equipment do you need?

A flat oval or running track, marker cones, recording sheets, stopwatch. Or you can use a good GPS watch like a Garmin, Polar or Wahoo Element device.

Place markers at set intervals around the track to aid in measuring the completed distance. Athletes run for 12 minutes, and the total distance covered is recorded. Walking is allowed, though the athletes are encouraged to push themselves as hard as they can to maximize the distance covered.

There are Cooper test normalised tables for general guidelines for interpreting the results of this test for adults.

There are also several equations that can be used to estimate VO2max (in ml/kg/min) from the distance score (a formula for either kms or miles):

But it’s easier to use the ChiliTri Cooper Test Calculator.

Who can do this Test?

The good news is that this test is great for everyone!

This test can be modified to be suitable for most populations. For those who are unfit or unable to run, there are similar walking tests that can be performed.

The 12-minute run fitness test was developed by Kenneth Cooper, MD, in 1968 as an easy way to measure aerobic fitness and provide an estimate of VO2 max for military personnel. So, this simple test has stood the test of time.

The reliability of this test would depend on practice, pacing strategies and motivation level. There should be good reliability if these issues are addressed. After a few attempts you will get used to the test.

Large groups can be tested at once, and it is a very cheap and simple test to perform. It’s also relatively quick and very easy to understand.

Practice and pacing is required, and performance on this test can be affected greatly by motivation. For any performance test make sure you are well rested, hydrated and are not doing the test fasted (make sure your body has sufficient carbohydrate stores to call upon).

The test can also be conducted by running on a treadmill for 12 minutes, set to level 1 (1 percent) incline to mimic outdoor running.

There are also many variations of the walk / run test.

A very similar test is the Balke 15 minute run.

Testing is generally easier to administer when the distance is fixed and the finishing time measured, so the alternative Cooper 1.5 mile (2.4km) run test was developed.

Get a free training plan or recipe book here.

The original article that describes this test: Cooper, K. H. (1968) A means of assessing maximal oxygen uptake. Journal of the American Medical Association 203:201-204.

Cooper Test Infographic from ChiliTri - contact me for a PDF copy

Back
More from author